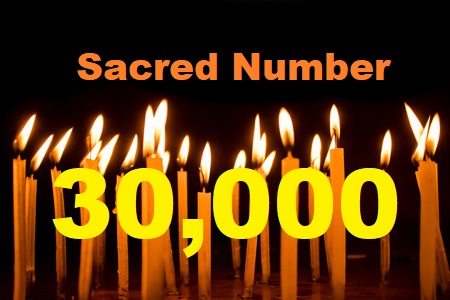 Sounds biblical. Trump Touts Dow Jones Trading Above 30,000: A Sacred Number.
President Donald Trump delivered very brief remarks Tuesday during which he celebrated the Dow Jones Industrial Average trading above 30,000 for the first time in history.
That is a sacred number, Nobody thought they would ever see it. That is the ninth time since the beginning of 2020 and it is the 48th time that we have broken records during the Trump administration, and I just want to congratulate all the people within the administration that worked so hard, and most importantly I want to congratulate the people of our country because there are no people like you.
Sources: dailycaller.com

Confidence in the dollar is lost completely, central bankers need to restore confidence, and they turn to some type of gold standard to do so.
John Pierpont Morgan: Money is gold, and nothing else.
The peak gold production is already here. There are no new goldfields of any significance waiting to be discovered.
As confidence in the dollar erodes due to Fed money printing and congressional super-deficits, investors gradually look for alternative stores of wealth, including gold. The time to go for the gold is now.
Sources:www.zerohedge.com, www.silverdoctors.com, www.zerohedge.com

Putin and Xi have agreed to create an independent financial infrastructure, that would be immune to ...

Trump lawyer says she is about to release the Kraken: I am going to expose every one of them.
S...